By Admin
September 04, 2011EntertainmentHD HottieHigh Definition VideoHollywoodMegan Fox
TVPredictions.com, a U.S. based TV technology news and analysis website, has named Megan Fox the “HD Hottie” for the last day of August. The site's rationale for giving Megan the day's popularity recognition was “Jennifer's Body” being shown in high-definition on Action Max last August 31.

Check out the photo. Reasonable enough? 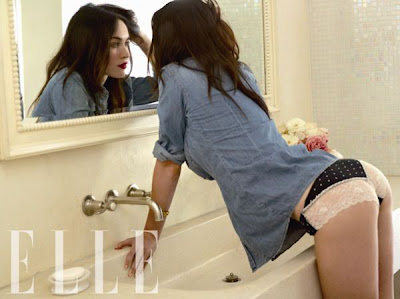 Megan Fox portrays a newly-possessed teenage serial killer specializing in killing her male classmates as her best friend strives to stop her. The film premiered at the 2009 Toronto International Film Festival and was released in the United States and Canada on September 18, 2009.

Anita "Needy" Lesnicki (Amanda Seyfried), once an insecure teenager, is now a violent mental inmate who starts the story as a flashback while in solitary confinement. Needy and popular cheerleader Jennifer Check (Megan Fox) have been best friends since childhood, despite having little in common. One night, Jennifer takes Needy to a local dive bar to attend a concert by indie rock band Low Shoulder. A suspicious fire engulfs the bar, killing several spectators, and Jennifer is taken by the band despite Needy's attempts to stop her. Later that evening, Jennifer, covered in blood, appears in Needy's kitchen and proceeds to eat food from the refrigerator. Unable to digest the matter, she vomits a trail of black, spiny fluid and then leaves in a hurry as Needy calls after her.

The next morning at school, Jennifer appears fine and shrugs off the concerns of Needy. While the small town is devastated by the numerous deaths caused by the fire, Jennifer seduces the school's football captain in the woods naked and then attacks him, where his disemboweled corpse is later found. Meanwhile, Low Shoulder gains popularity due to their rumored heroism during the fire and offers to make a charity appearance at the school's spring formal. Low Shoulder's song "Through the Trees" had become the town's unofficial anthem and the newly released single would donate 3% of the profits to the people who lost loved ones in the fire.

A month later, Jennifer is beginning to look pale and accepts a date with school goth/punk Colin (Kyle Gallner), whom she brutally kills that night. While Needy and her boyfriend, Chip (Johnny Simmons), engage in sex, Needy senses something dreadful has happened. She leaves in a panic and almost runs over Jennifer, covered in blood. She rushes home and finds Jennifer in her bedroom who initiates physical intimacy with her and soon explains what happened after the fire: Low Shoulder took her into the woods, and offered her as a virgin sacrifice to Satan in exchange for fame and fortune. However, although the sacrifice and greedy exchange were a success, Jennifer was not a virgin, and when the lead singer Nikolai (Adam Brody) murdered her, a demonic spirit took over her body. It is revealed then that Jennifer knew she needed human flesh and blood to survive. In addition to the known murdered townspeople, Jennifer also encountered the exchange student, Ahmet, after the fire and upon hearing that no one knew he had survived, she took him into the woods and ate him, making him her first victim.

The next day at school, as the town is stunned by Colin's death, Needy goes to the school library's occult section and surmises that Jennifer is a succubus; she is weakest when she is hungry, and must eat flesh in order to sustain her life and appearance. Needy tells Chip about her discoveries and warns him not to attend the dance. He does not believe her and she subsequently breaks up with him in order to protect him.

Chip goes to the dance, hoping to meet with Needy, but he is intercepted by Jennifer, who seduces him and takes him to an abandoned pool house. Needy arrives there and finds Jennifer feeding on Chip. Needy tries to drown Jennifer and then helps Chip out of the pool. Jennifer, hovering in the air, attacks Needy but is later stabbed by Chip with a pool skimmer. Jennifer escapes while Needy watches her boyfriend die.

Needy then decides she must kill Jennifer. She goes to Jennifer's home and sees Jennifer lying on her bed picking out her next victims in her yearbook, and she crashes through the window and fights her with a boxcutter. Culminating with a stab to the heart, Needy finally destroys the demon and kills Jennifer. Jennifer's mother (Carrie Genzel) comes in and finds Needy with the utility knife on top of her daughter's body. Soon after, Needy is brought to an asylum. Since she was bitten by Jennifer, she has obtained some of Jennifer's supernatural powers. Set upon revenge for what was done to Jennifer and herself, she escapes the mental facility and hitchhikes a ride to the hotel where Low Shoulder are staying; she makes her way to their room and brutally murders them all. {Source}