By Spicy Sugar
September 09, 2011Diether OcampoEntertainmentmoviesRakenrol
After 5 years in the making, director Quark Henares's “Rakenrol” is finally coming out. The much-anticipated movie is Henares' and co-writer Diego Castillo's (“Sandwich” guitarist) ode to the Philippine rock music scene, which both consider their home. 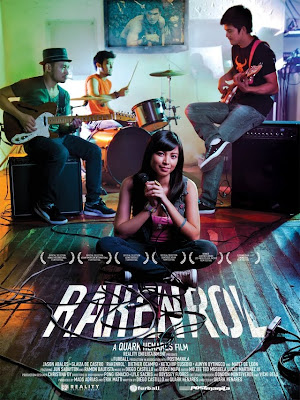 Odie (Jason Abalos) and his best friend Irene (Glaiza de Castro) are two outsiders who find a second home in the Philippine underground music scene. The two decide to form a band and put together an unlikely crew that consists of the school bully (Alwyn Uytingco), an ex-punk-turned-barista (Ketchup Eusebio), and a former-childstar-turned-band-manager.

In the film Irene and Odie are outsiders who become best friends because of their common love for rock n' roll. Odie eventually falls in love with Irene and helps fulfill her dream of forming a band.

They recruit an ex-punk-turned-barista named Mo and the school bully Junfour and decide to call their band “Hapipaks.” In the process, Irene is wooed by her “all-time supercrush,” the famous rockstar Jacci Rocha (Diether Ocampo).

Will Odie's love for music and Irene prevail, or will the one thing that brought them together end up destroying them?

The supporting characters add color and humor to the cast, with Ramon Bautista as the music video director Flame Tigerblüden, Ricardo Cepeda as a samurai marketing guru, Jun Sabayton as Mo's artist roommate, Hiyasmin Neri as Junfour's pregnant girlfriend, and Matet de Leon as herself.

Co-written by Diego Castillo and directed by multi-awarded music video director Quark Henares, “Rakenrol” is a heartfelt ode to the underground scene both filmmakers spent their formative years in.

“Rakenrol” is made possible by Reality Entertainment, Inc., Furball and Postmanila. The musical-comedy film will be shown in theathers starting September 21, 2011.