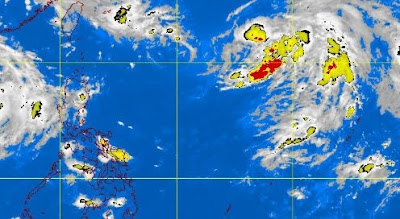 The state weather bureau said that as of 6:00 pm today, Tropical Depression “Onyok” was estimated based on satellite and surface data at 1,240 kilometers (km) East Northeast of Basco, Batanes (21.3°N, 135.4°E) with maximum sustained winds of 55 kilometers per hour (kph) near the center. It is forecast to move West at 9 kph.

No public storm warning signal has been raised, Pagasa said, adding that TD “Onyok” is still too far to directly affect any part of the country.

Estimated rainfall amount, according to weather experts, is from 5 -15 millimeters (mm) per hour within the 350 km diameter of the tropical depression.