By Unknown
September 28, 2011appleiPhone 4SiPhone 5October 4 Apple Event
Here's an unsolicited advise: If you're thinking of getting yourself or a loved one an iPhone this month, put your plan on hold or you might regret later because you bought the previously-released product when the next generation is already up for grabs. 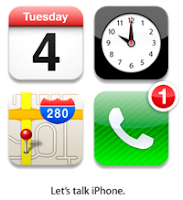 Yes, as the post title says Apple has schedule its next event on October 4, and according to TechCrunch, it will be about the iPhone.

While everyone is expecting for Apple to launch the iPhone 5, we're thinking iPhone 4S—the former a high-end phone for the US and European market, the latter a low-end, more afforable version intended for developing countries—or it could be both so everybody will be happy.

Go ahead, make a guess.