To be fair and to better understand what the bill is all about, we're posting the full text of the Anti-Planking Act of 2011 followed by our own take on the issue.

AN ACT PRESCRIBING A UNIVERSAL CODE OF STUDENT CONDUCT WHEREBY PLANKING BY A STUDENT OR GROUP OF STUDENTS DURING STREET RALLIES OR SIMILAR PROTEST ACTIONS AS A FORM OF REDRESS OF GRIEVANCE BE STRICTLY PROHIBITED AND APPLYING APPROPRIATE SANCTIONS THEREOF
September 20th, 2011

Be it enacted by the Senate and House of Representatives of the Philippines in Congress assembled:

SEC. 2. A universal Code of Student Conduct is hereby prescribed where planking as a form of redress of grievance be strictly prohibited and appropriate sanctions be applied for violations thereof.

SEC. 3. Under this Act, planking is when a student or group of students lies face down in unusual locations especially in streets or other public places, keeping the hands along the body and the feet outstretched and especially where such act is meant as a form of redress of grievance against government.

SEC. 4 Every bonafide student from any school, college or university shall conduct himself with high degree of discipline and propriety.

Further, DepEd and CHED, respectively shall issue appropriate rules and regulations to effectively carry out intent and purpose of this Act.

SEC. 6. This Act shall take effect ninety (90) days after its publication in the Official Gazette and in at least three (3) newspapers of general circulation.

What prompted Congressman Castelo to file the controversial bill was the scene where members of a student organization planked during the September 19 transport strike along España road in Sampaloc, Manila. 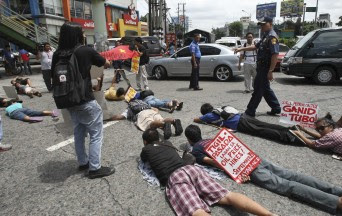 In his bill, Castelo said he fears that planking will be used as an example in dealing with “subsequent street rallies or protest actions initiated by students to express redress of grievances against the status quo.”

Castelo, the way we understand it, is concerned that planking, which is simply purposely done to disrupt traffic when a transport strike is held, “could just be very dangerous in the future” considering that warm bodies lie in the street, face down, and pose great risk not only to the students but to motorists and the riding public as well.

Remember that once it becomes a law, the Anti-Planking Act of 2011 only penalizes students who will perform planking during rallies and protest actions, not at ‘all times’ as you may have initially thought.

It is very specific. However, do you think it is necessary? Are netizens not overreacting?