Agusan del Sur now on the map, thanks to "Lolong" the giant croc

By Admin
September 09, 2011Agusan Del SurDepartment of Tourismgiant crocodilenewsopinionPhilippinesTourism
Agusan del Sur, a province in the Philippines located in the Caraga region in Mindanao, has caught media attention both local and abroad since the 21-foot giant crocodile was captured last week, something that the people there should be thankful for.

The raw video showing its captivity is raking hits on YouTube and is becoming viral with a little less than one million views four days after its was uploaded.

Thanks to “Lolong” for putting Agusan del Sur on the map. Local and foreign tourists, who are uncontented with just watching the video in the internet that they wanted to see the large reptile in the flesh, are coming in. 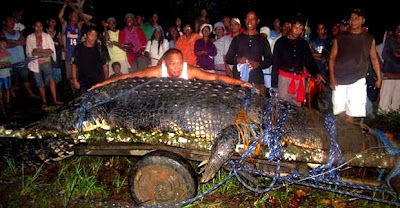 The government should strike while the iron is hot. It must take the necessary steps to further boost eco-tourism in the area as it generates business and employment opportunities which will eventually redound to an improved local economy.

Reports say that Bunawan mayor Cox Elorde has given the green light for the construction of a wildlife park that will feature the province's diverse species, not just the crocodiles but the Bunawan snails as well.

Elorde has called for donations to sustain the maintenance of the sanctuary housing the saltwater crocodile and to cover the cost of its food.

Once it's done, the wildlife park is expected to become an income generating project, but while the construction is ongoing, the LGU will need funds for the upkeep of the temporary crocodile facility.

I think this is the right time for the tourism department to make a move and help boost tourism in the area. Although it's more of a local event, it's a challenge for the new DOT leadership, acting secretary Ramon Jimenez, and a very good starting point for him.