In a privilege speech delivered before his colleagues and staff, family, supporters and media at the Senate, Zubiri maintains that he “did not cheat,” but decided to quit his post for his family, who has “suffered physically and emotionally because of baseless accusations” against him, for the Senate and the nation.

“I did not cheat nor ask anyone to cheat for me and my family. We would never tolerate any form of electoral fraud,” Zubiri said.

“And in this August Chamber, without admitting any fault and with my vehement denial of the alleged electoral fraud hurled against me, I am submitting my resignation as a duly elected Senator of the Republic of the Philippines in the election for which I am falsely accused without mercy and compassion,” Zubiri stressed.

He added: “I am resigning, not because I am exhausted from the demands of my calling as a legislator. Hindi po ako napagod sa paglilingkod sa inyo. I am resigning, not because I wish to evade the decision of the Senate Electoral Tribunal. Handa ko pong tanggapin ang anumang hatol mula sa nasabing hukuman. Rather, I am resigning because of these unfounded accusations against me and these issues has systematically divided our nation and has casted doubts in our electoral system which has affected not only myself, but this Institution together with the public as well.”

“And as a legislator, who is being referred to in the Senate as “Your Honor”, I believe that my honor is something that should never be subject to taint. No amount of power, position or wealth is worth sacrificing one's honor and integrity,” Zubiri said.

Zubiri assumed office on July 14, 2007 and resigned on August 3, 2011—the first time in the entire history of Philippine politics that a senator has resigned. 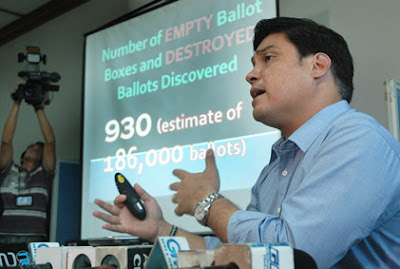 Zubiri ran for senator under the ticket of Lakas-Kampi-CMD, the political party coalition of then president Gloria Macapagal Arroyo.

In the final tally for the 2007 senatorial race by the Comelec, Zubiri had narrowly defeated opposition candidate Aquilino “Koko” Pimentel III for the 12th and last slot in the Senate.

Zubiri had a total of 11,001,730 votes against Pimentel's 10,983,358 votes. The margin of some 18,372 votes was hotly contested, particularly the votes from the southern Philippine province of Maguindanao, where Pimentel had lost heavily to Zubiri.

The Senate Electoral Tribunal (SET) on June 19, 2008 resolved to proceed with the election protest of Pimentel saying “there is reasonable ground to believe that the final outcome of the case could affect the officially proclaimed results of the 12th senatorial position in the May 14, 2007 national elections, hence, the election protest case deserves further proceedings by the tribunal.”

Atty. Koko Pimentel, meanwhile, in an interview on ANC said he is disappointed on Zubiri for labeling the accusations as “baseless” adding that pieces of evidence of poll fraud are “everywhere.”

Pimentel reportedly said he believes Zubiri's resignation means he is “no longer contesting the position” or “not anymore interested in the position” which will put his electoral protest at the Tribunal “moot and academic.”

He said he will consult his lawyer, who happens to be his own father, former senator Aquilino “Nene” Pimentel Jr., for his next move.