Her black and lacy dress, as StyleBistro describes it, “featured sheer panels, a high collar and an asymmetrical hem that showed off her toned legs.” 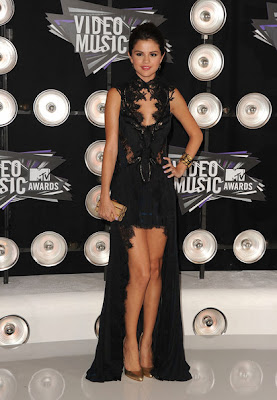 And what else did the television viewers utter? Nothing but “Wow!”

Selena, who was given a kiss by her boyfriend, teenage pop icon Justin Bieber as she interviewed him, looked elegant with her attire and vampire-look at the VMAs.

It was seen by stylists, fans and observers as a “departure” from her usual feminine, girl-cutie style.