By Unknown
August 23, 2011Board of NursingBoNNursing Board Exam July 2011opinionSimplified Oathtaking
The decision made by the Professional Regulation Commission - Board of Nursing (PRC-BoN) to declare “simplification and cost saving measures in the conduct of oathtaking of nurses” nationwide, as contained in a BoN advisory dated August 21st, earned both praises and criticisms. 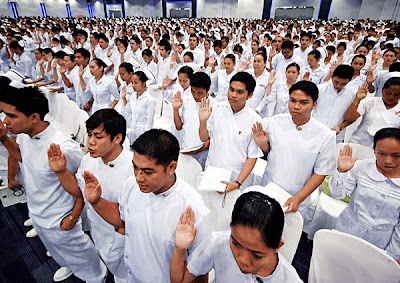 According to BoN member Marco Antonio Sto. Tomas, the board has “done away” with the “traditional mass oathtaking” to respond to “current economic difficulties” and “current job scarcity” among nurses.

“Simplified oathtaking” means passers may take an oath, individual or by group, at the same time of registration at PRC; no more costly oathtaking at SMX and other venues in the regions.

NLEResults.com, one of Coolbuster.net's social networking arms, asked through Facebook Questions what the July 2011 NLE passers would prefer - Mass Oathtaking or Simplified Oathtaking.

More than 300 respondents answered Mass Oathtaking while only 40 sided with Simplified Oathtaking.

So why was the response unfavorable? The way we see it is that many are dismayed with BoN's decision for the following reasons: it was abrupt and made without prior consultation.

This issue deserves a deeper discussion, what do you think?