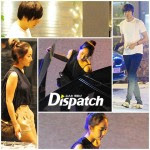 Korea's Dispatch reported that sources revealed that the two stars have “developed a romantic feeling toward each other” because of “City Hunter.”

“When the two appeared in the drama together, they were quite in tune with one another. It seems that they’ve developed feelings for each other during the filming and after filming concluded,” King Kong Entertainment, Park Min Young’s agency, reportedly stated.

The report added that in the evenings, Ho and Young “either drank tea together or had a beer; they also spent their leisure time going on drives.”

Both their agencies said: “It has been a little over a month since they began to show interest in one another. Other than that, we cannot reveal any more details about the actors’ private lives.”

According to Dispatch, a source close to Park Min Young corroborated the earlier statements, saying “It is true the two have good, mutual feelings for each other. I think she’s trying to get to know the human-side of Lee Min Ho, not the actor Lee Min Ho.”

Photos taken after the “City Hunter” lead stars spent time together at a coffee shop in Seoul were released by Dispatch.