By Unknown
August 11, 2011HeelloNew Twittersocial networking
Twitter has new competition. It's pretty fresh and has been opened to the public very recently.

In your status updates called ‘Pings’, you can attach a video, photo and/or location. Other users can reply to your pings with @reply. We've tried Heello and it's really like Twitter, easy to use but simplier.

If you would like to follow our updates at Heello, just search for @coolbuster, @socialnetwork, @pinoy, and/or @prcexamresults. Each of these accounts will have different topics. 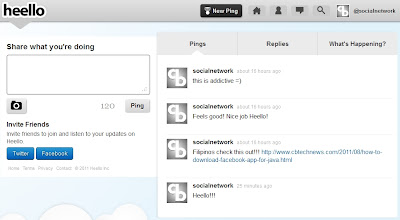