By Unknown
August 04, 2011Christopher LaoFloating Car ControverynewsOfficial Statement
UP Law graduate Christopher Lao became an instant internet sensation after GMA-7 aired a report showing his car floating in flood water along with an interview where he was caught on cam blaming the government, traffic enforcers and people in the area for what happened.

In the interview, Lao complained that he “should have been informed” that the road he was taking was impassable due to flood. That statement created a stir in the internet.

Shortly after the video was uploaded on YouTube, netizens immediately turned to social networking sites to criticize him. Lao became one of the trending topics on Twitter nationwide just as hate pages on Facebook started to sprout.

We blogged about the incident earlier, here. 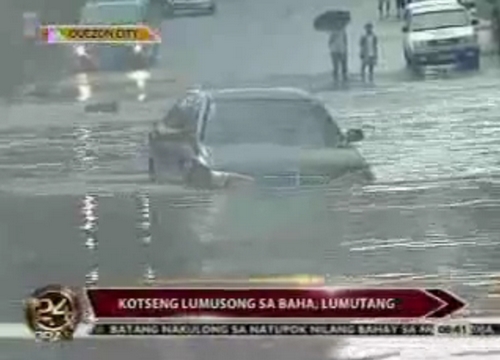 In a Facebook note, Christopher Lao through Marlon Cornelio had issued his official statement. And so that it will be balance and fair, we are re-posting his statement below:

The past few days have been very disheartening for me and my family. As you know I have been a subject of a viral video that showed my helplessness during a trying moment. As it stands right now, I have several hate pages in Facebook and Twitter with hurtful and derogatory messages attacking my person. The reputation that I built the past years has been besmirched. A bad day has now turned into wounded feelings and sleepless nights for me and my family.

I have been silent the past few days as I want this to go away soon but not before saying sorry and thank you to people who matter.

I would like to apologize for my behavior that was seen on nationwide television and now on the internet. It was unfortunate that I was caught on camera immediately after an overwhelmingly stressful mishap.

I would like to again sincerely thank those who braved the flood to help a distraught stranger like me. Their selfless act reminded me of how dependable Filipinos are in times of crisis.

Lastly, I would like to thank my family, friends and all of those who showed empathy, consideration and support throughout these trying times. You have given me strength and courage to rise above and be a better person.