By Admin
August 28, 2011ABS-CBNAngeline QuintoChoose PhilippinesChoosePhilsmusic videoTravel and LeisureVince Bueno
Choose Philippines, the country's newest travel website, or as ABS-CBN puts it “the world's first ever social network where you can share and post your discoveries around the Philippines,” went down while its music video is being officially launched on ASAP Rocks.

The downtime must be caused by the high volume of traffic brought by the promotional launch of the music video entitled “Piliin Mo ang Pilipinas,” performed by Angeline Quinto featuring Vince Bueno, on ABS-CBN's Sunday variety show.

In a press statement, the Kapamilya network said the song was written by Robert Labayen of “Bro, Ikaw ang Star ng Pasko” fame and the man behind several highly-admired ABS-CBN station IDs.

Choose Philippines (www.choosephils.com), which is spearheaded by ABS-CBN's Regional Network Group (RNG), features parts of the country that are undiscovered. The site showcases travel destinations, regional cuisine, local culture and the colorful fiestas and festivals.

Patrons can sign up, write and share stories and experiences, and upload photos of tourism destinations within the Philippines. 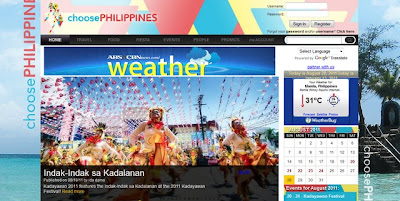 The website is still down as of this posting, but a cached page can be accessed here.