By Admin
August 09, 2011CBCPCCPCultural Center of the PhilippinesKulo ExhibitnewsPoleteismo by Mideo Cruz
The Cultural Center of the Philippines (CCP) is expected to announce its decision on the controversial art exhibit today. The Catholic Church and some religious groups have condemned the art display where Christ's images that were altered, some added with a condom and wooden penis, can be viewed publicly and for free. 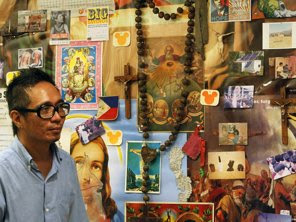 Critics among them the Catholic Bishops Conference of the Philippines (CBCP) have called for the boycott of the exhibit, specifically the artworks by Mideo Cruz called “Poleteismo,” an installation which the CCP claims has been exhibited since 2002.

Other organizations have also called for the removal of Cruz’s work, and even for the closure of the exhibit. Some groups reportedly threatened to sue the artist and have sought for the ouster of CCP officials.

CCP's decision will be based on the outcome of the public forum held last August 5 which, according to reports, was attended by educators, representatives of religious organizations, art practitioners and experts on culture and law.