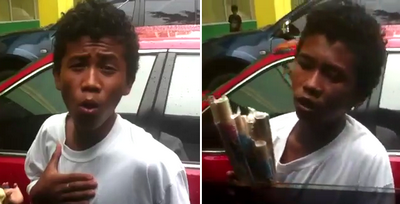 The young singer, who had a jamming session with Vice Ganda on the weekend show where he did some beatboxing and sang Justin Bieber's “Baby” and Bruno Mars' “Just The Way You Are,” received rave reviews from people and netizens who where able to watch him perform.

In the interview with Vice Ganda, Arjohn revealed that he has been singing to attract customers to buy his flutes, a musical handicraft which he personally makes and sells, for years.

The “Pampanga singing flute vendor” said he braces sun and rain in selling his product in order to have an income and bring his family food.

The following YouTube video which features Arjohn has gone viral with over a million hits as of this posting.


It seems Arjohn's success on TV, YouTube and Twitter will bring him to something bigger. He has been invited by international singing sensation Charice to perform with her.

“Arjohn, next time I do my own show in the Philippines, I would love for you to come and perform with me!,” Charice, whose rise to stardom also started on the popular video-sharing site, said on her Twitter account.

The singer-actress likewise told her fan group to look for the singing Aeta boy. “Let's find him, Chasters. Please find his FB, or whatever so we can contact him :),” Charice tweeted.