By Admin
July 26, 2011Bus accident in SkywaynewsSkyway
The driver of the passenger bus that fell from the Skyway onto the west service road in Marcelo Green Village in Parañaque City while on its way to Alabang, Muntinlupa has died. Reports say the driver succumb to death at around 12:20 Tuesday afternoon due to massive bleeding and trauma to the abdomen. 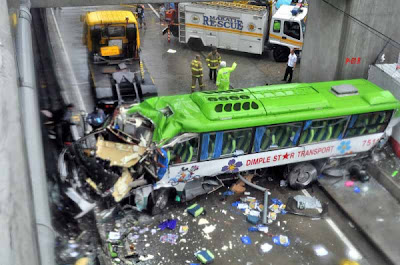 News reports say that authorities are now contacting the family and relatives of the bus driver of Dimple Star Transport Corp. Bus No. 7511.

Three more persons were hurt in the crash. The bus conductor reportedly suffered minor injuries, but two passengers are reportedly in critical condition as of this posting.

According to reports, Skyway Corp. officials said they are still trying to investigate what caused the bus to fall off. The CCTV video is reportedly being reviewed to find out what really caused the accident.

Update: Reports on Tuesday evening said 3 persons were already dead, including the driver.

The specific cause has not been determined yet although several sources said it was slight speeding that led the bus to go out of control. The conductor and company management, however, insisted that a "strong wind" hit the bus as it was nearing the Sucat exit.