By Admin
July 14, 2011Boys Slapfest VideoDSWDnewsSampalan in 3DTV PatrolvideosYouTube
The Sampalan in 3D video, which showed two boys with ages around 8-10 years in a match that appeared as a slapfest, has been removed because its content “violated YouTube's terms of service.” It went controversial after getting featured in a primetime news program. 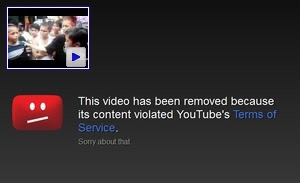 TV Patrol on Thursday reported that the Department of Social Welfare and Development (DSWD) was “alarmed” after watching it.

DSWD program management bureau director Patricia Luna reportedly said that they are now studying the option of filing a case against the adults who were involved, caused the slapping match to happen.

Luna reportedly said that while the boys are not accountable being minors, the adults clearly violated provisions of Republic Act 7610, otherwise known as the Anti-Child Abuse Law.