By Spicy Sugar
July 08, 2011Angelica PanganibanAustin Gabriel RamsayDerek RamsayEntertainment
It seems intrigues are following Derek Ramsay at all times. In late June, the issue about his previous marriage with Mary Christine Jolly, a Filipina-Indian model, has surfaced, followed by an expose on TV Patrol which showed a marriage contract bearing among other details their names, and the date and place where the wedding rites happened.

Here's the recent development. Although this one isn't widespread yet as the source site is just starting to get popular, it is expected to become a hot topic on print and broadcast media as well as on social networking sites Twitter and Facebook in the coming days.

The latest buzz about Derek Ramsay is that he, allegedly, has a son with Mary Christine Jolly.

The issue first broke on Filipinas In Showbiz, an entertainment website/blog. In its post “Is Derek Ramsay Married To A Filipina-Indian Model?,” two readers posted an obviously intriguing yet unconfirmed information that Derek has a son named “Austin Gabriel Ramsay.”

The following is the series of comments on FilipinasInShowbiz.com:

“COBY: it is true. he is married to mary christine jolly-ramsay and they have a son together – austin gabriel who is now almost 8 years old. i can vouch for this as she was my officemate here in dubai.”

“The Feisty Filipina: @Coby, wow. Well I hope Derek has a relationship with his son.”

“LEI: Well yes. It is an open secret here in Dubai. It was in 2009, when Derek’s son needs to renew his passport at the Philippine Consulate. Go check from NSO – his son’s name is Austin Gabriel Ramsay. Apparently Derek does not want anything to do with his son, so the wife is fending for themselves.”

Derek along with his girlfriend, actress Angelica Panganiban, during interviews said the issue about his past marriage is being handled by his lawyers. The actor has pointed out that it's a personal matter which he promised to “share with everyone and have to face in the coming months.”

Angelica, meanwhile, said she is standing by her boyfriend's side amid the controversy. The Kapamilya actress also claimed that she knew about the issue even before they got into the relationship. But...if it's true that Derek has a son with Mary Christine, does she know about him too? 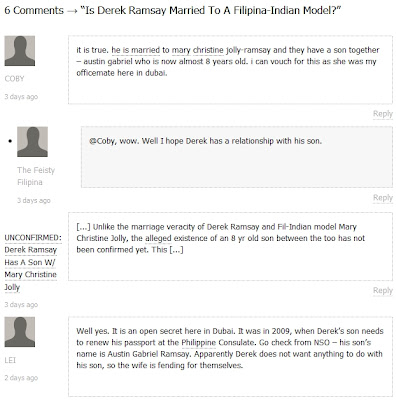