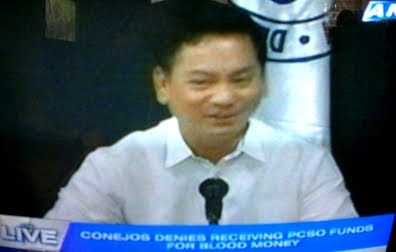 In a press conference held at the DFA, Conejos said payments were not by cash, but by managers checks payable to names of victims' families and were given directly to them. “I categorically deny receiving cash from Uriarte,” he pointed out.

Conejos said he told Uriarte that no money should be coursed through the DFA; instead, it must be given directly to the beneficiaries. He said 3 checks for 3 beneficiaries, at P5 Million per beneficiary, for a total of P15 Million and not P20 Million as Uriarte claimed, were directly given to the victims' families.

During Thursday's inquiry by the Senate Blue Ribbon Committee into the PCSO fund scam, Uriarte identified DFA undersecretary Conejos as the one who personally received P5 million in cash in four instances in payment for the so-called blood money.

Hearing Uriarte's claim, Senator Franklin Drilon commented: “All the auditing rules were violated when an amount of P5 million in cash was transferred from one entity to another department.”

The senate investigation on the PCSO controversy will resume on Wednesday, July 13. The Blue Ribbon Committee is set to have an executive session with Uriarte that day.