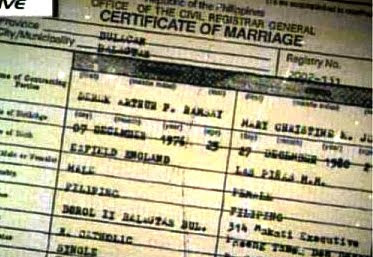 Speaking on ABS-CBN's TV Patrol which aired the expose about Derek's previous marriage with the Fil-Indian model, Atty. Jean Ferry said the actor's marriage with Mary Christine can be considered legal up to the present.

“If the certificate of marriage has no annotation that is required, then on its face, the marriage is still subsisting and still valid. To other persons, he is still married,” Ferry said.

A copy of the marriage contract obtained by ABS-CBN News from the National Statistics Office (NSO) reportedly shows that “Derek Arthur Ramsay” and “Mary Christine Jolly” wed on April 3, 2002 at 3:00 p.m. during a ceremony officiated by then municipal mayor Reinaldo Castro at his office in Balagtas, Bulacan.

In the same news feature, the hunk actor said he has referred the matter to his legal counsel.

“My lawyers are taking care of the various legal options that we have and handle the issue; it’s being taken cared of as we speak,” Derek reportedly said.

“This is a very personal matter which I’ll share with everyone and have to face in the coming months. For me...just like all the other intrigues that happen every month, I’ll focus on work. And for those who have given support, I want to say thank you and let you know that she (referring to his girlfriend, actress Angelica Panganiban) stands by me and our relationship is very strong,” the actor reportedly added.

Angelica during the interview was sitting beside Derek, calm and relaxed.