By Admin
July 10, 2011Albie CasiñoAndi Eigenmann pregnantEntertainmentMark Gil
Veteran actor Mark Gil on Sunday, July 10, was a trending topic worldwide on Twitter, and even locally, after his interview on ABS-CBN's “The Buzz” went on-air. In the interview, Mark Gil reportedly divulged clues as to who the father of the baby of his pregnant daughter, Andi Eigenmann, is. 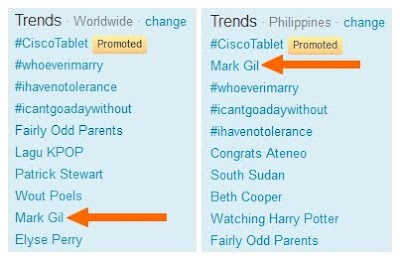 Netizens went abuzz and immediately turned to the social networking site Twitter to get updates on the issue and discuss what transpired during the interview.

Here are some of the most interesting tweets about Mark Gil:

“resa b. nepomuceno (@resaabigail): Mark gil's interview was very intense and sincere.. Now, I think, the public should hear the other side of the story as well..”

“Miley Cyrus PH (@mahalkitaMILEY): Mark Gil: 1. The guy hit his daughter in an incident in Greenbelt. 2. The guy slammed Andi online, accusing her of having many boys.”

“Sir Lawrence Agustin (@SirLawrencium): Mark Gil almost named the father of Andi's baby with his words. He even called 'him' a 'pathetic animal'. I agree, actually.”

“We’re not asking anything from you, boy, I just hope your parents teach you well. Do you have parents? What kind of parents do you have? Nanggugulpi ka nang babae hindi ka man lang pinangaralan. Ngayon, papalabasin ninyo pa na we are happy and we are willing to have DNA test. Come on, that’s enough the insult,” he added.

Andi Eigenmann is now five months pregnant. Albie Casiño, who allegedly is the father of her unborn baby, has kept mum on the issue.