By Admin
July 19, 2011comelecLintang Bedolnews
After four years in hiding, former Maguindanao election supervisor Lintang Bedol on Tuesday surfaced and “surrendered” to the Commission on Elections (COMELEC) to face the charge of contempt for failing to appear in investigations relative to the alleged cheating in the 2007 senatorial polls. 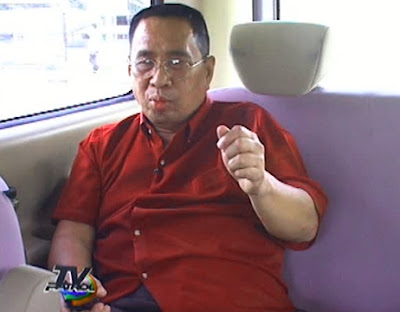 Wearing a bulletproof vest, Bedol arrived at the COMELEC headquarters at 9:11 Tuesday morning, more than 1 hour late of schedule.

In a press conference, COMELEC chairman Sixto Brillantes confirmed that Bedol was “turned over” to them by representatives of the Department of the Interior and Local Government (DILG) and Philippine National Police (PNP).

Bedol was first arrested in July 2007, but he posted bail and went into hiding. In a recent interview, Bedol said he evaded arrest because he believed people behind the poll fraud “may want to have him dead.”

Although he greeted the media with “Hello, kumusta kayong lahat,” Bedol declined to answer questions from them. He also decided not to make a public statement, but reports said he is set to submit before the COMELEC his affidavit and evidence to support his claim that there was poll fraud.

The COMELEC en banc held a meeting to determine the detention facility for Bedol. It officially placed the former poll supervisor in its custody to carry out his final conviction for contempt back in 2007.

In a follow up presscon held before noontime, Brillantes said the COMELEC en banc unanimously decided, except for Commissioner Rene Sarmiento who is on official business, to detain Bedol at the PNP Custodial Center in Camp Crame where he will serve his “sentence” for 6 months.

Screen grab is from TV Patrol