By Spicy Sugar
July 06, 2011EntertainmentHeart EvangelistaMarian RiveraTemptation Island
Her followers on Twitter got shocked when Kapuso actress Heart Evangelista allegedly posted undesirable messages and stern warning against Marian Rivera, another Kapuso star whom she was rumored to have a rift with, using her account @heart021485.

“Heart” called Marian “bobita” and “marianita bobo” on Twitter Wednesday morning. She allegedly sent the following tweets from a smartphone:

Netizens suspected that the account was hacked and immediately jumped into the conclusion that it was done purposely to ignite a clash between the actresses' camps.

“Twitter got hacked.We called her and she's in the mall right now shopping..Please beware.”

“One more thing Heart is not using iPhone to tweet coz her twitter doesn't work there.If you will notice the recent tweets were posted using iPhone..Heart uses web to tweet..FYI!”

Then after a while, the group posted:

“RT @Heartworld @heart021485's acct got hacked.heartworld fixed the prob but saved the fake tweets.it's evidence for how low one will go to just to win.Pray” 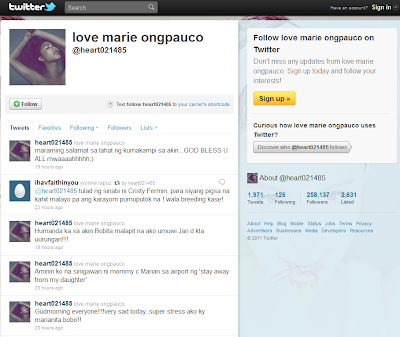