By Admin
July 01, 2011blogbloggingStarmometerTopBlogs
An election (a political exercise) and blogging (an online activity) have something in common - the notorious "dagdag-bawas." We've noticed that the term was used by Starmometer when it complained about the alleged manipulation by TopBlogs of its tally.

Starmometer is the leading entertainment blog in the Philippines while TopBlogs is an internet portal that provides a directory and ranking of Filipino-owned or managed websites and blogs.

In a post dated May 24, 2011, Starmometer author “cd” wrote that for the second time, he caught Topblogs doing “a dagdag bawas in their tally.” The blogger alleged that TopBlogs has cut the number of his blog visitors by half. After his post created a stir among bloggers, Starmometer's rank went back to where it used to be - at the top.

We thought the incident was isolated to Starmometer. We were wrong. For the past several days, we saw some blogs jump from one rank to another, higher to lower and back and forth, thereby affecting the overall ranking of sites.

Last Wednesday, Coolbuster.net was at number one in the News & Journalism category. At noontime, we observed that the stats for this site stopped and didn't have activity for the rest of the afternoon eventhough the visitor counter showed that thousands accessed this site courtesy of our post on Philippine Azkals versus Sri Lanka and the release of results of the Pharmacist Board Exam.

TopBlogs' widget did work again in the evening, but we were so shocked to find out that this site suddenly dropped to second place when in fact we led by thousands before the problem occured.

We would like to make it clear that the team is not after the rankings. We prefer quality over quantity at all times. What we would like to know, not for our own sake but for the rest of its member-sites, is why TopBlogs is doing this or allowing this to happen.

Is favoritism a factor? Is money involved? Or is it just a plain technical problem?

Topblogs is free and we know we don't have the right to compel them to answer. We just hope that the people behind it will look into this matter carefully, correct the error if there's any, prevent unusual things from happening again and bring back the credibility of the rankings.

Update: We appreciate TopBlogs' prompt action on this issue. Now, if the ranking changes again before lunchtime Sunday when it resets, something is really wrong. 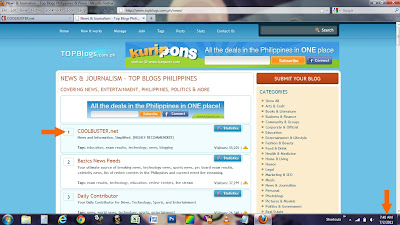