By Spicy Sugar
July 26, 2011Bagyong JuaningPAGASA Weather Forecastpagasa weather update as of July 26 2011Storm WatchTropical Storm Juaning
Update as of Tuesday, July 26, 2011 — The Philippine Atmospheric, Geophysical and Astronomical Services Administration (PAGASA) on Tuesday reported that Bagyong “Juaning” has intensified further and slowed down as it continues to threaten Southern and Central Luzon including Metro Manila. 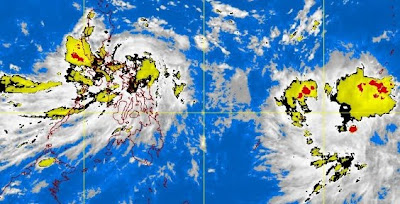 In its Severe Weather Bulletin No. 7 issued at 5:00 p.m., the state weather bureau said TS Juaning was estimated at 70 km North Northwest of Daet, Camarines Norte with maximum sustained winds of 85 kilometers per hour (kph) near the center and gustiness of up to 100 kph. It is forecast to move West Northwest at 11 kph.

Signal No. 2 (60-100 kph winds):
Signal No. 1 (45-60 kph winds):
The education department already suspended classes in parts of Luzon which are affected by the storm [view details here].

In a press conference held at the PAGASA headquarters before noontime today, weather forecasters said TS Juaning is expected to make landfall in Aurora tonight.

Residents in low lying and mountainous areas under signals #2 and #1 are alerted against possible flashfloods and landslides. Likewise, those living in coastal areas are alerted against big waves or storm surges generated by this tropical cyclone, PAGASA said.

Weather forecasters added that TS Juaning will enhance the Southwest Monsoon and will bring widespread rains over the Rest of Luzon and Western Visayas.