By Spicy Sugar
July 06, 2011Anne CurtisEntertainmentKylie MinogueMRT
To make it sure that she's going to make it to Kylie Minogue's concert as fast as possible, kapamilya actress Anne Curtis rode the Metro Rail Transit (MRT) which proved her being a huge fan of the Australian pop sensation.

There was heavy traffic, the event was going to start in about fifteen minutes and she is already running late so she took an MRT ride to Cubao station.

To share such experience to her 1 million followers on Twitter, Anne uploaded a photo of her inside the MRT with the following tweet: “Hulaan nyo Kung nasaan ako para makahabol kay #Kylie? :p” 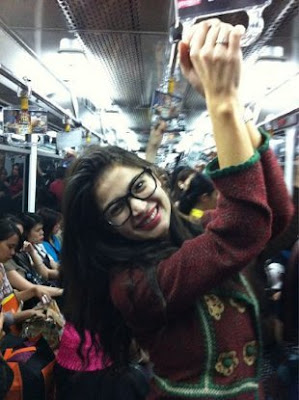 Anne's MRT ride paved the way for the transit system to become one of the trending topics on the popular micro-blogging site Tuesday evening.