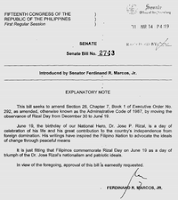 Marcos believes that Rizal's birthday should be celebrated and observed as a national regular holiday, rather than celebrating a holiday on a day of the hero's death.

“June 19, the birthday of our National Hero, Dr. Jose P. Rizal, is a day of celebration of his life and his great contribution to the country's independence from foreign domination,” Marcos in the proposal said. “His writings have inspired the Filipino Nation to advocate the ideals of change through peaceful means.”

“It is just fitting that Filipinos commemorate Rizal Day on June 19 as a day of triumph of the Dr. Jose Rizal's nationalism and patriotic ideals,” the Senator added.