During the "Gypsy Heart Tour" concert in Manila, her lone Asian stop, Miley unveiled her new daring image. As you can see on the videos, which are embedded on this page, she had showcased her sexy moves onstage wearing a black shimmering bra and leather shorts. 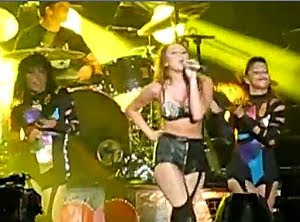 Now that she has bid her cutie image goodbye, those kids who watch Nickolodeon are probably not happy about it and might exclude her in the nomination process for the Kids' Choice Awards.

The Disney star won a "Favorite Movie Actress" award in 2010.