By Admin
June 24, 2011Jimmy BondocnewsTornadoTwister
A mild tornado has reportedly hit New Manila in Quezon City on Friday, June 24, 2011. Singer-musician Jimmy Bondoc, who resides in the area, in a TV interview said he had witnessed the destruction caused by the twister and could not believe what happened.

Speaking to ANC, Bondoc revealed that when the tornado struck, he thought it was the end of the world. The entertainer described the incident as somewhat similar to a scene in the movie ‘2012’.

“A TORNADO JUST PASSED OUR HOUSE. No major damage,but some neighbors lost rooftops,etc. Pls pray for us.”

The singer-musician uploaded the following photo of the twister incident: 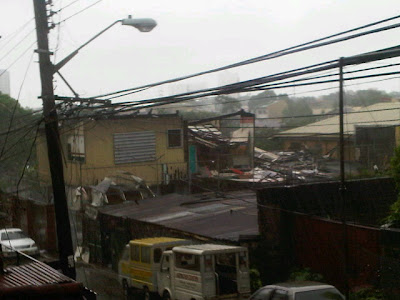 Twitter user @cheftonio confirmed the occurence of the tornado. “Uploaded a video of the said twister. It was happening when I recorded this video,” he tweeted.

According to reports, the twister destroyed several houses and downed some trees as well as electrical lines.