By Coolbuster
June 14, 2011Animal Abuseranimal crueltyfacebookHanged DogHanged PuppyJerzon SenadornewsPAWS
The incident involving Jerzon Senador, a young boy from Calamba, Laguna who reportedly hang dried a puppy last Sunday, June 12 (Independence Day), took photos of it in different angles and posted them on Facebook, serves as a warning to all animal abusers. 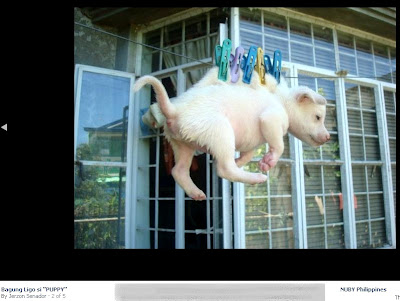 The internet went abuzz shortly after he uploaded several of those ‘disturbing’ photos and, apparently, in less than 24 hours he got himself into trouble when animal and pet lovers immediately created and supported a Facebook page with the title “Report, Jerzon Senador the Animal Abuser” purposely “to raise awareness regarding animal cruelty.”

More than 4,300 netizens liked the page before its creator temporarily blocked users to post photos, videos and comments, and eventually deleted the page at exactly 8:30 PM on Tuesday, June 14. 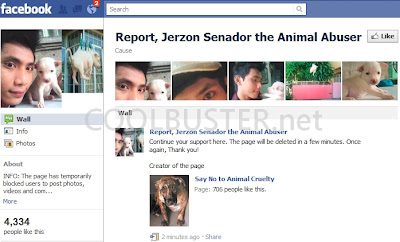 The campaign caught the attention of the Philippine Animal Welfare Society (PAWS), a non-profit organization that promotes the “protection and humane treatment of all animals.”

PAWS in a report on ABS-CBN's primetime news program ‘TV Patrol’ on Tuesday evening said it will file in court a complaint against Senador for violating Republic Act (RA) 8485, also known as the Animal Welfare Act of 1998.

Meanwhile, Senador, who earlier reportedly admitted that he had done it out of boredom, was apologetic for his action. His post at around 4 PM on Tuesday read:

However, his status updates earlier were in the contrary. He reportedly posted: