Grace Lee tweets she met President Aquino, spoke to him

“Oooh got to meet and speak to president Aquino!!! :D congratulations KEPCO for the successful event:)”

Her tweet sounded like she was elated to have met PNoy although there was no indication that she already has knowledge of the buzz about her being linked by media and bloggers to the bachelor president.

Succeeding tweets indicate that the radio DJ doesn't even have a clue that she is a hot item in the internet and is currently trending, at top spot, on Yahoo! Search.

Lee has become a favorite topic on tv, radio, blogs, websites and online fora since Monday following several news reports that she got President Aquino's attention at KEPCO's inaugural program where she served as the emcee.

The president has always appealed to the media to stay away from his private life, but what can he do? It's a fact that he is the Philippines' first-ever president who is single and people do enjoy talking about his lovelife. 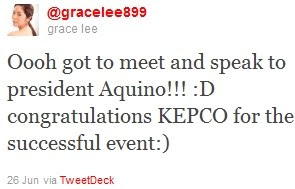