Bagyong Falcon may intensify into a Tropical Storm

In a televised press conference held before lunchtime Wednesday, state weather forecasters said Falcon has slightly accelerated as it continues to move northwestward over the Philippine Sea. 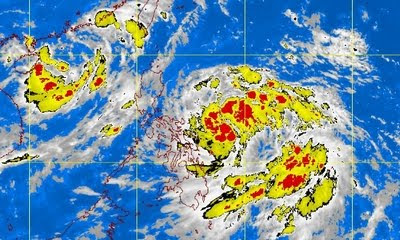 Falcon has maintained its strength of 55 kilometers per hour (kph) near the center, PAGASA said.

As of 10 AM, PAGASA reported that the weather disturbance was spotted at 450 kilometers east of Virac, Catanduanes and is forecast to move northwest at 19 kph.

The weather bureau also said Bagyong Falcon is expected to bring occasional rains over the country becoming widespread over the eastern section Southern Luzon, of Visayas and of Mindanao.

Bagyong Falcon may not make landfall, weather forecasters said. It is expected to leave the Philippine Area of Responsibility this Saturday.

Falcon, PAGASA said, is the sixth tropical cyclone for the year and the third for month of June.