Andi Eigenmann breaks her silence, says Jake Ejercito is not her baby's dad

In a message via the social networking site Twitter, the controversial Kapamilya actress has cleared the name of Jake Ejercito, one of her two former boyfriends who was accused of impregnating her.

Her other ex-boyfriend is “Mara Clara” actor Albie Casiño.

On June 30 at around 8PM, the “Agua Bendita” star posted the following status update on Twitter which continued on TwitLonger:

“For your better understanding, I've only had one boyfriend before Jake whom I've only been seeing for the past 2 months. Therefore, Jake cannot be the said ex-boyfriend whom everyone has been talking about. #commonsense”

The hashtag is interesting. 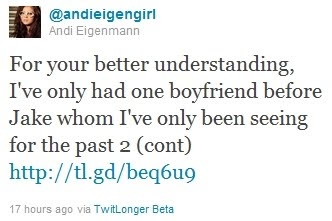 Jake and Andi, the latter insists, have “only been seeing for the past 2 months.” She is already 4 months pregnant.

Now that Andi has cleared Jake, “common sense” tells us that there's only one name left.