Planking — What is it all about?

By Spicy Sugar
May 18, 2011facebooknewsPlankPlankingPlanking Australiasocial networking
Planking, the act of lying face down with arms to the sides in unusual public spaces and photographing it, has become a popular word among netizens after it claimed one life in the land down under.

According to reports over the weekend, 20-year-old Acton Beale who attempted to perform a plank accidentally fell from a 7th floor of an apartment in Kangaroo Point‘s Main Street, Australia at about 4:30 AM (local time) last Sunday. Beale was pronounced dead minutes later. 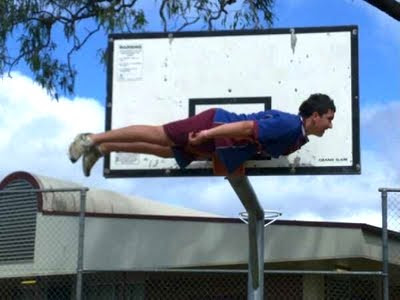 Since then, several pages about planking were created; existing ones became more popular than before. One of these pages is “Planking Australia.”

From 9,000 plus Facebook ‘likes’ several days ago, the number of fans has dramatically increased to more than 137,000 as of this posting, which only means that netizens on the social networking site got curious or interested in planking.

Due to the reported accident, Planking Australia has written a one-liner on its About page. It reads: “Be Safe.”

For the curious ones, Facebook user Tatiana Alexa has the following guide on how to perform a plank properly:

1) You must always lay face down, ensuring your face remains expressionless for the duration of the Plank.
2) Your legs must remain straight, and together with toes pointed.
3) Your arms must be placed by your side, held straight and fingers pointed.
4) You must make it known that you are Planking. Saying 'I am Planking' usually get this across. Sternly announcing it will ensure a good result.
5) Your safety should always be considered. Properly thought through Planking procedures should always go to plan. Never put your self at undue risk.
6) Every Plank that is captured must be named.

Planking has gone viral in other countries the past weeks, but hasn't got the interest of Filipinos at this point in time. There are maybe some, but the fad isn't widespread yet. By the way, here's a newly-created Planking Philippines fan page on Facebook.