By Unknown
May 08, 2011Pacquiao vs Mosleyreplay videovideo replay
Wearing his lucky yellow gloves, WBO world welterweight champ Manny “Pacman” Pacquiao was able to defend his title belt with a win over challenger Shane Mosley in their championship match on Saturday, May 7, 2011 at the MGM Grand Garden Arena in Las Vegas before a jampacked crowd of more than 16,000. 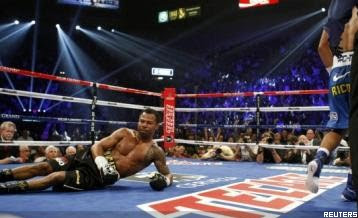 It was a unanimous decision. Pacquiao truly is the living legend!!!

Pacquiao knocked down Mosley in the third round with a left hook that sent the latter to the canvass. Later in the fourth, Mosley's legs buckled.

Although referee Bailey called a knockdown in the tenth in favor of Mosley, but many did not believe Pacquiao was knocked down; there was no punch at all; Mosley stepped on Manny's foot and pushed him. Some observers said it was sort of an accidental slip.

The older warrior wasn't able to take the powerful punches and speed of his younger opponent. Mosley was slow, tired and a little bit rusty. He didn't have an offensive game plan; he was on the defensive against Pacquiao's attacks in the full twelve rounds.

The Filipino champ, who was the more aggressive fighter throughout the match, took control of the fight. Sports analysts commented that it was one-sided.

It was an easy victory for Pacquiao. Mosley should retire.

Pacquiao vs Mosley replay video is up once available on the web.