By Unknown
May 09, 2011Jinkee Pacquiaomanny pacquiaonewsParis Hilton
Jinkee Pacquiao, wife of WBO welterweight champion Congressman Manny Pacquiao, looked great during the Pacquiao-Mosley fight at the MGM Grand Garden Arena in Vegas last Saturday. It was her shining moment as cameras panned on her while Team Pacquiao marched towards the ring.

A sports anchor who covered the match didn't miss mentioning Jinkee, with some positive feedback about her told over pay-per-view television.

While the match was ongoing, the camera went off-focus from the fighters in the ring as if it was trying to capture Jinkee's reactions. It panned on her again after Manny was announced as winner.

Observers from the neighborhood said Jinkee was very pretty that night; she looked blooming. One fan even joked that maybe because it was Mother's Day. 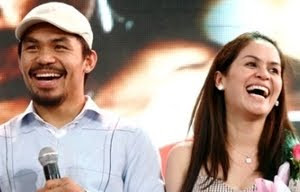 Anyway, Jinkee together with her husband celebrated the latter's victory with American socialite and model-singer Paris Hilton during the post-fight news conference.

Reports said the wifey looked on as Paris, a known Pacquiao fan who revealed she looks forward to be with the couple when she visits the Philippines, posed with Manny when the press requested for photos of them together.

Immediately after the event, Paris tweeted, “Wow! Such an honor to be brought on stage by Manny & his wife Jinkee after the fight. Can’t wait to visit them when I go to the Phillippines.”

Some observers who were able to attend the presscon said that during that photo op Jinkee was just on her seat, very relaxed and was smiling.