Amaya (GMA-7) director: Marian Rivera 'had to run in the forest topless, barefooted under the sun while holding a snake'

By Spicy Sugar
May 31, 2011Amaya GMA-7Marian Riveranewstelevision series
‘Amaya,’ along with ‘Sisid’ and ‘Playful Kiss’ premiered Monday on GMA-7. Amaya made history of its own being the first-ever ‘epic-serye’ (historical drama) on Philippine TV.

The story revolves around a young princess, portrayed by Marian Rivera, who is forced to enter into slavery. She later discovers her extraordinary powers, which she uses to lead her people at a time when males dominated society.

Upon checking the social networking sites the following morning, we noticed that Amaya became one of the trending topics and it received positive reviews in entertainment sites and blogs as well.

One common feedback among netizens who were able to watch the pilot episode last May 30 is that it was “nakakabitin” which clearly indicates that viewers are craving for more.

A Twitter user posted that Amaya’s setting and the costumes of its actors and actresses, specially that of the lead characters, were amazing. “Mukhang pinagkagastusan talaga ng husto,” the fan posted. 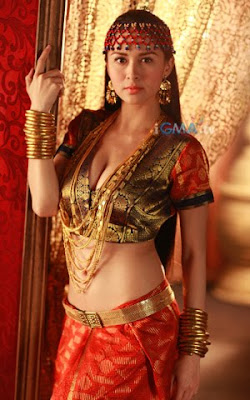 Meanwhile, Inquirer Entertainment reported that the series is created by the same team that worked on “Encantadia” in 2005. No wonder many find the show interesting, from the teaser to the TV trailer to Monday’s pilot episode and expectedly until the ending.

Marian has reportedly worked hard for this series. Director Mac Alejandre, in an interview with IE, revealed that the actress “had to run in the forest topless and barefoot under the hot sun while holding a full-grown snake.”

“She did this repeatedly, with no qualms,” Alejandre reportedly said, adding “I made her walk on the sand from 9 a.m. to 6 p.m., but I never heard her complain.”

According to the director, who also helmed ‘Endless Love’ starring Marian and boyfriend Dingdong Dantes last year, added that the project costs “hundreds of millions of pesos” without elaborating the exact amount.