By Spicy Sugar
April 08, 2011Jan-Jan IncidentnewsopinionShalani SoledadWilling Willie
While exploring the web for trending topics of the day, I was able to stumble upon an April 6 article on Manila Standard Today entitled “What would you do for P10,000?” written by Adelle Chua who expressed her disappointment over Valenzuela City councilor Shalani Soledad.

I am disappointed that my councilor, the former presidential beau Shalani Soledad, has not said anything or taken any stand at all regarding the present controversy involving the show she appears on with Willie Revillame. 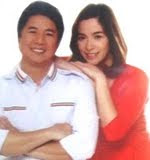 I also watch the controversial game show on TV5 and there was not a single instance where Shalani had spoken out her thoughts on the issue.

Although it's quiet obvious that she takes side with Willie Revillame, the latter being her boss in the show (and suitor/boyfriend if we are to believe the rumors), at least she would have shared her opinion being the most influential woman in the country.

Is Shalani, as a politician, just playing safe?