By Unknown
May 25, 2011concertsFree TicketsMiley CyrusmusicnewsPromos
American actress and pop singer Miley Cyrus, yours and your little sister's favorite, will be coming to Manila for a one-night concert (it's her lone Asian gig, actually) at the MOA Concert Grounds in Pasay City on June 17, 2011 at 8PM. 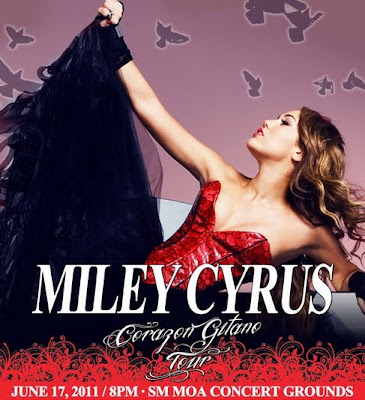 Based on the listing at the Ticket World website, the ticket prices for the Miley Cyrus “Corazon Gitano Tour” range from Php650 up to Php7,640.

Just in case you wanted to watch the Miley Cyrus live in Manila concert for free, just browse this page every now and then for information on promos. We've been tipped that a telecoms and multimedia company plans to hold promotional activities related to the Miley Cyrus concert.