By Admin
April 14, 2011Boyfriend-Girlfriend TV commercialCBCPMcDonaldsnewsvideos
The latest McDonalds TV ad showing two minors in an apparent “ligawan” or “boyfriend-girlfriend” situation was reportedly pulled out after the Catholic Bishops Conference of the Philippines (CBCP) reacted on the message the commercial delivered. 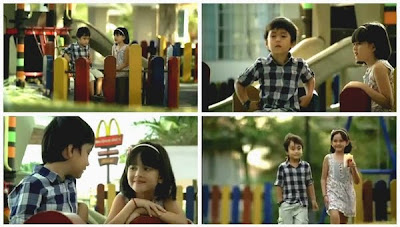 While others, including me, find the burger chain's TVC cute, some may call it inappropriate. {Read related article in Filipino}

In an official statement, McDonalds as a response reportedy said the company respects the views and opinions of the CBCP regarding the issue and that they have stopped airing the subject ad in all TV stations.


...and viewers also have their own thoughts.

“Here we go again. Those priests are imposing their medieval beliefs. Wake up CBCP, it's already 2011. That is why﻿ we are f****d up as a nation because of these hypocrites. Why not clean up your own mess first and stop meddling with smaller issues. >.<”

“CBCP- the new MTRCB ??? :) Seriously, I respect what these religious﻿ leaders have to say about what is morally right...but hey ! don't forget, there are parents who could guide and teach their children about those seen on TV...So lighten up! It is just a "funny ad" you know....:)”

“who is cbcp to pass judgement on this commercial? c'mon, don't you have better things to do other than picking on commercials? are you bored with your lives? Mcdo has always promoted filipino values in their commercials just in case you haven't see the others. in this one, it's plain childhood innocence being﻿ played out. kayo ang malisyoso!”