Manny Pacquiao “Sometimes When We Touch” 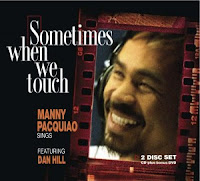 While the Filipino pride undergoes training for his title defense against Sugar Shane Mosley at the soldout MGM Grand in Las Vegas, he is also busy promoting his single that will be launched next week.

The pound-for-pound king is now in Los Angeles with his wife Jinkee and coach Freddie Roach and the rest of Team Pacquiao to prepair for his upcoming bout.

With Manny's side-by-side TV appearances, music recording, product and commercial endorsements and an anticipated win in his title match next month, many will surely agree if we call him the “Male Superstar.”

If there's a Nora Aunor, who reportedly lost her singing voice already, then there should also be a male counterpart. Agree?