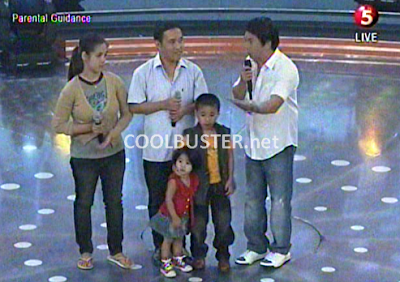 According to the complaint-affidavit, Joe and Diana filed a case against Grate for making it appear that Jan-Jan is an “abused child” and that his family allowed Jan-Jan to be abused in exchange for money and fame, a report on the OMG Philippines News Blog said.

Blogger John Silva, whom others dubbed as a “culture critic,” on the other hand, posted online the following: “What do these companies, Willing Willie, Channel 5, and Pedophiles have in common? THEY LIKE DOING MACHO DANCING.”

The said post is in violation of Article 353 of the Revised Penal Code, according to the complaint-affidavit.

Carandang, the report said, wrote a letter to Movie and Television Review and Classification Board (MTRCB) chairperson Grace Poe-Llamanzares to “register our very strong condemnation of the child abuse shown” on “Willing Willie” by host Revillame. In the same letter, the words “abuse was done on a 6-year-old boy named Jan-Jan” was also written.

The complaint-affidavit said that saying Jan-Jan was abused is an imputation of a vice or defect that caused dishonor, discredit, and contempt to their family and Jan-Jan.

In a press conference held Wednesday at the Manila Golf Club in Forbes Park, Makati City, John Pineda, lawyer of Suans, reportedly said the couple believes no abuse was done to their child. Pineda reportedly added that the family does not want Jan-Jan to become a “poster child” for child abuse.

The Suans, according to the report, said they wanted to have their private life back.

{For more of this story, please head over to Yahoo's OMG Philippines News Blog}

Under Article 353 of the Revised Penal Code of the Philippines, libel is defined as “a public and malicious imputation of a crime, or of a vice or defect, real or imaginary, or any act, omission, condition, status or circumstance tending to discredit or cause the dishonor or contempt of a natural or juridical person, or to blacken the memory of one who is dead.”