By Admin
April 22, 2011Biyernes SantoCrucifixionGood FridayHoly Week 2011newsSeven Last Words
Good Friday, called “Biyernes Santo” in Filipino, “he hagia kai megale paraskeue” (the Holy and Great Friday) in the Greek Liturgy, “Holy Friday” in Romance Languages and “Charfreitag” (Sorrowful Friday) in German, is the English designation of Friday in Holy Week — that is, the Friday on which the Church keeps the anniversary of the Crucifixion of Jesus Christ.

Parasceve, the Latin equivalent of paraskeue, preparation (i.e. the preparation that was made on the sixth day for the Sabbath; see Mark 15:42), came by metonymy to signify the day on which the preparation was made; but while the Greeks retained this use of the word as applied to every Friday, the Latins confined its application to one Friday. Irenaeus and Tertullian speak of Good Friday as the day of the Pasch; but later writers distinguish between the Pascha staurosimon (the passage to death), and the Pascha anastasimon (the passage to life, i.e. the Resurrection). At present the word Pasch is used exclusively in the latter sense. The two Paschs are the oldest feasts in the calendar.

From the earliest times the Christians kept every Friday as a feast day; and the obvious reasons for those usages explain why Easter is the Sunday par excellence, and why the Friday which marks the anniversary of Christ's death came to be called the Great or the Holy or the Good Friday. The origin of the term Good is not clear. Some say it is from "God's Friday" (Gottes Freitag); others maintain that it is from the German Gute Freitag, and not specially English. Sometimes, too, the day was called Long Friday by the Anglo-Saxons; so today in Denmark.

Biyernes Santo or Good Friday, is celebrated worldwide by Christians including overseas Filipino workers (OFWs) from all corners of the globe. In the Philippines, Christians go to church to attend the Mass where the Seven Last Words, also called ‘Siete Palabras’ are read and elucidated, and sometimes dramatized. 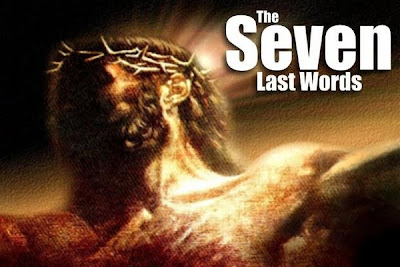 The 1st Word of the seven last words
Then said Jesus, Father, forgive them; for they know not what they do. And they parted his raiment, and cast lots. (Luke 23:34)

The 2nd Word of the seven last words
“And Jesus said unto him, Verily I say unto thee, To day shalt thou be with me in paradise.” (Luke 23:43)

The 3rd Word of the seven last words
“When Jesus therefore saw his mother, and the disciple standing by, whom he loved, he saith unto his mother, Woman, behold thy son!” (John 19:26)

The 4th Word of the seven last words
“And at the ninth hour Jesus cried with a loud voice, saying, Eloi, Eloi, lama sabachthani? which is, being interpreted, My God, my God, why hast thou forsaken me?” (Mark 15:34)

The 5th Word of the seven last words
“After this, Jesus knowing that all things were now accomplished, that the scripture might be fulfilled, saith, I thirst.” (John 19:28)

The 6th Word of the seven last words
“When Jesus therefore had received the vinegar, he said, It is finished: and he bowed his head, and gave up the ghost.” (John 19:30)

The 7th Word of the seven last words
“And when Jesus had cried with a loud voice, he said, Father, into thy hands I commend my spirit: and having said thus, he gave up the ghost.” (Luke 23:46)