You sing like an `angel´ Idol judge tells Thia Megia

By Unknown
March 10, 2011American Idol Season 10newstalent searchThia Megia
Filipina-American Thia Megia, one of the 13 finalists of the US hit talent search show American Idol Season 10, on Wednesday, March 9th (Thursday the 10th in the Phils) performed “Smile,” a song based on an instrumental theme used in the soundtrack for the 1936 Charlie Chaplin movie “Modern Times.” 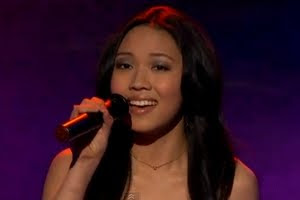 There was a little bit of a side comment though. Jackson and JLo were one in saying that Thia was better singing with only the guitar as accompaniment in this week's show.

“Thia...I love the intro man when you were just singing by yourself with the guitar it was just so beautiful, I can hear the Michael in you...I got a little pitchy in spots that you started with the band with the kinda jazzy arrangement...I love the beginning more than the end...” Jackson said.

“The beginning ouverture reminded me of what you did last week a little bit, last time we saw you sing, when you sing On My Own and obviously that's where your strength is, when we get to hear that beautiful voice it's like it's transcended...but I like seeing you move. I don't think we've seen you move. I actually like to see more of that and more of what you can do in that area. But it doesn't matter, you sing like an angel,” JLo commented.

The 15-year-old singer, seen crying backstage after her performance, said, “I don't know. I just hope America can give me another chance to do it better...”