By Spicy Sugar
March 02, 2011Justin BiebernewsSelena Gomez
Teen Hollywood star Selena Gomez seems to really enjoy her relationship with boyfriend international Pop/RnB superstar Justin Bieber who, by the way, is celebrating his birthday today, March 1st (US time), since they publicly appeared as a couple during the Vanity Fair at the Oscars 2011 after-party.

Entertainment news site JustJaredJr. reports that the teen stars went out for a date to celebrate JB's birthday. Based on photos shown at the site, both had publicly displayed their affection towards each other.

In the photos, Selena was seen holding Justin Bieber's hands as they head out for a bite to eat on Tuesday afternoon. “The new couple went shopping at a local mall, stopping at D&G and Louis Vuitton and shared a few hugs along the way,” the report said. 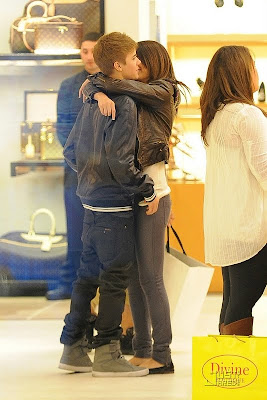 Justin Bieber turned 17 on March 1. He is one year and several months younger than his girlfriend Selena Gomez who will turn 19 on July 22.

JB will have a “My World Tour” Concert in Manila on May 10, 2011. I wonder if he has a plan to bring Selena with him at the event.