By Unknown
March 23, 2011impeachmentnewsOmbudsman Gutierrez
The senate is expected to convene as a court for the impeachment trial against Ombudsman Merceditas Gutierrez in May this year, senate majority leader Vicente Sotto III told the media Tuesday. 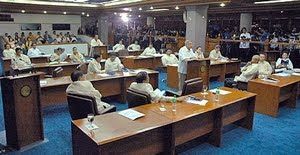 Sotto reportedly said that senators are expecting to receive the articles of impeachment from the House of Representatives within today. House justice committee chairman Iloilo representative Niel Tupas says they will file the impeachment case at the Senate this afternoon at around 2:30pm.

Sotto said the Senate will take up its legislative works in the mornings. He proposes the following schedule for the impeachment trial vs Ombudsman Gutierrez:
The House of Representatives in a 212-46 votes with four abstentions impeached Ombudsman Gutierrez early Tuesday for her alleged betrayal of public trust.

We will update this post for the Ombudsman impeachment trial final schedule.

Update: The Senate approved on Wednesday the rules for the impeachment trial of Ombudsman Merceditas Gutierrez in May.

Media reports said the amended rules include a provision specifying that senators must adhere to the principle of “political neutrality” defined as the “exercise of public official duty without unfair discrimination and regardless of party affiliation.”

The Senate also expects members of the impeachment court, the prosecution and defense panels, Ombudsman Gutierrez the accused, and witnesses “to refrain from talking in public about the merits of the case” or grant interviews during the trial.