By Unknown
March 05, 2011newsPBB Season 4Reality Show
ABS-CBN on Friday, March 4, held the first of a series of auditions for the most-awaited reality TV show, Pinoy Big Brother Season 4, at the SM Mall of Asia (MOA) concert ground. Reports said the organizer estimated the crowd to have reached more than ten thousand people.

The overwhelming number of auditionees, who brought with them a common dream of becoming the next PBB housemate as a stepping stone to fame and fortune, as well as the increasing security and health risks because people kept on coming despite the 3pm registration deadline prompted the staff to issue a Facebook advisory early Friday evening for hopefuls outside of the venue not to pursue their plan to audition and instead wait for the next schedule. 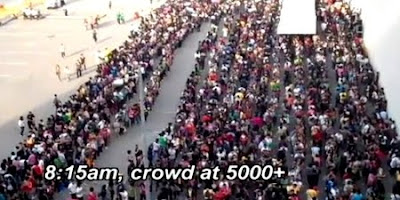 More details and a video on this page. To join PBB Season 4 fan page on Facebook, click here.