By Unknown
March 22, 2011impeachmentnewsOmbudsman Gutierrez
The House of Representatives on Monday impeached Ombudsman Merceditas Gutierrez. The house voted 212-46 in favor of the impeachment of Gutierrez for betrayal of public trust right after nearly eight hours of a marathon debate that ended past midnight. 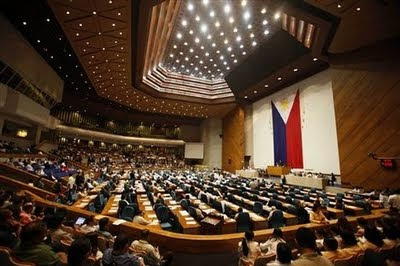 Four lawmakers abstained. Only ninety-five votes, or one-third of the total house members, were required to impeach Gutierrez.

House Resolution No.1089 submitted by the House Committee on Justice will form basis of the Articles of Impeachment.

It will be sent to the Senate which will transform into an impeachment court. Media reports say the Senate impeachment proceedings have been set in May.

Meanwhile, Malacañang issued an official statement on the approval of the Articles of Impeachment against Ombudsman Gutierrez. Presidential Spokesperson Edwin Lacierda said:

The House of Representatives made history tonight, by approving the Articles of Impeachment against Ombudsman Merceditas Gutierrez. By doing so, the House has put an end to the long era of impunity that tarnished our institutions and made a mockery of the bedrock principle of accountability enshrined in our Constitution.

In contrast to the recent past, when the shame of our institutions was cloaked in darkness, it is as if daylight radiated from the Session Hall of the House as it voted to uphold the principle that public office is a public trust. No one is above scrutiny and no one, particularly the brazen, can escape accountability.

The House, in transmitting the Articles of Impeachment to the Senate, now has the task to vigorously and effectively make its case to the combined juries of the Senate sitting as the Court of Impeachment, and to the Filipino people who will be sitting in judgment on the entire process. This is the glory of democracy: where the law applies to all, where scrutiny exempts no one, and where accountability is for our institutions to exact.