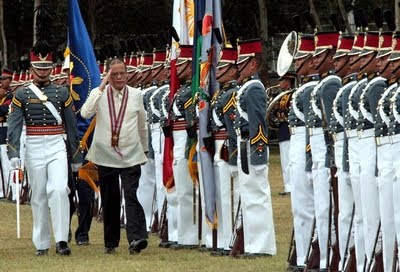 The Chief Executive made the announcement yesterday during the 106th commencement exercises of the Philippine Military Academy’s Laon Alab Class 2011 at the Borromeo Field in Baguio City.

Oban is the third AFP chief to come from the Air Force since 1996. Before his appointment as the new AFP Chief, Oban held the position of Deputy Chief of Staff responsible for the administration and supervision of the joint coordinating technical and special staffs of the military headquarters.

Oban is a member of PMA Class 1979 who graduated as one of the topnotchers. He was formerly Vice Commander of the Air Force.

Lt. Gen. Oban, a former instructor pilot who hails from Sorsogon, will only serve as AFP chief for ten months as he is set to retire on December 13th.

Oban’s most prominent role in his career, according to the PCOO report, was his involvement in negotiations to end the Oakwood mutiny in 2003. The general was among those chosen by Magdalo group to be part of the government panel that negotiated with them for their return to the barracks.