By Unknown
March 19, 2011Joseph the ArtistnewsTV5videosWilling Willie
Talentadong Pinoy 2011 grand winner Joseph the Artist on Saturday, March 19th, guested on TV5's primetime game show Willing Willie and showcased his talent, to the amazement of studio audience and televiewers, while host-producer Willie Revillame sang his hit single “I Love You” in the background. 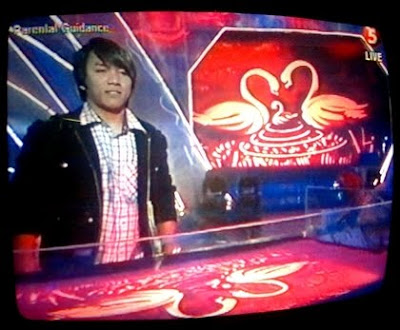 Prior to that, the Ultimate Talentado interpreted through a sand art the instrumental version of Willie's hit single “Ikaw Na Nga.”

Right after his performance, Willie gave Joseph the Artist P50,000 cash and TechnoMarine watches for his children.

Watch Joseph the Artist's performance on Willing Willie, video of which will be embedded here soon!

Joseph is very interested in drawing ever since he was young. Joseph’s education was a struggle, he wanted to pursue a fine arts degree in college but due to financial problems as his father is a carpenter﻿ he was advised to enroll for a practical vocational course. Though he was taking an electrical course he continues to draw that is being appreciated by classmates, schoolmates and teachers.

Joseph uses his talent to help family finances by﻿ submitting his work of art to comic publishing house. Salary is still insufficient so he also works as a part-time shoemaker assistant in a neighborhood shoe shop. Because of his polio-stricken legs he has been teased by neighbors and because of all those laugh from his neighbors he dreamt that they would look up to him someday.

Joseph began his sand art after the Ondoy typhoon incident. He was sifting dirt and sand because their home was among those thousands who had suffered the﻿ rage of the typhoon when he realized that he can make something out of those sands.

Joseph joined Talentadong Pinoy, He is not aiming to win by that time. All he thinks is he could bring something home for his family. But Joseph has a very special God given talent that he has been a champion for eight times already. By that time to be a part of the Talentadong Pinoy Hall of Fame, you must be able to win straight nine times. At﻿ the night of the supposedly nine times competition he lose over Cedie a singer.